The Fun Story :
In 1984 I attended a house party in Lansdowne , Pa.   A very large group of young people having fun on a summer night. I decided to walk down the basement where I hear cheering. I see a young adorable girl shooting pool playfully for money. She continues to win so this peeks my interest. I challenge her and she wins easily.
I say to her , “ I will give you the money from the pool game bet but only if you drive with me to the beach to watch the sun rise. “
She looks at me weirdly with great puzzlement and replies , “ It’s 11am. The sun rose hours ago. “
Yep , I was humiliated but it would be the start of something extremely special.
6 months pass and I see her for the 2nd time in Avalon , NJ at a deck party on the bay. She is fishing and again cheering erupts as she catches a large rare blue King Fish in the bay. “ This just doesn’t happen here “ , says the owner of the home. We start to talk and have many friends in the same circle and interests. It was than we begin to date.
3 Years of dating and it was time to pull the trigger for marriage. Our families get along excellent. But , the first and honorable thing to do was to ask the Father for her hand.
While skiing at Camelback Resort I take the ski lift up the mountain with her Father. I turn to him and pull out a flask of brandy and say , “ Sir , there are 2 possible scenarios that are going to happen here. One – you’re going go throw me off this ski lift or Two – you’re going to allow me to marry your daughter. “  He snarls at me with his strong mechanic hands and goes for my neck to squeeze it. Just as he is about to grab my neck he grunts , “ Give me that flask.............Son. “
The Set-up and Epic engagement at The Spectrum for a 76ers game in March of 1987 :
It was Julius Erving's ( aka The Doctor ) chance to hit 15,000 points so we wanted to attend the game. My nickname was “ The Doctor “ and I actually met Mr. Erving in Bryn Mawr at a job site. These events tied in my Surprise for a marriage proposal. Before the game , I arranged to have family and friends spread out the arena along with both parents and family filling 2 rows of seats.  I also contacted the Spectrum’s staff to have my future wife’s name placed letter by letter on the Jumbotron.  The scene was set and the staff had the 76ers mascot “ Big Shot “ in on it too. Again , my future wife thinks this is for Doctor J’s 15,000th point and big celebration for it.
So , the clue to the Jumbotron technician controlling the letters on the board is --  If my future wife holds a basketball up ( given by Big Shot ) above her head this means she says YES to my proposal. He would then write it on the board.
The game begins with a car give away. The Jumbotron spells out to fans at halftime to check your ticket number to see who wins the car. The one little problem , I was making my proposal at halftime too.
Here is what happened in front of 17,357 fans :
Big Shot mascot is coming down our row with a huge 5 foot long bag of popcorn and a basketball. I tell my girlfriend to look at the Jumbotron. She sees her name come across the board one slow letter at a time. She is staring at the board intensely and patiently as letters spell her name slowly. She says, “ Oh My God , did I win the car ? “   - Finally , the Jumbotron tech spells out , “ N--a-n-c-y   w-i-l-l   y-o-u   m-a-r-r-y   m-e ? “   She turns to me and I am kneeling in front of her with a ring in my hand. She is totally surprised and confused thinking she still may have won a car as Big Shot hands her a basketball. I say to her , “ If you say YES , hold the basketball above your head and look at the Jumbotron again. “  She lifts the ball above her head laughing and crying simultaneously. The tech sees this action and writes out slowly, “ Nancy ........Says ........Yes !! “ All the men boo in the stadium but all the girls cheer. The mascot splooges us with popcorn as family and friends rush us from the 2 rows and from the hidden corridors to hug and congratulate us.  It was several unforgettable magical moments of laughter, emotion , and heart warming feelings. She said YES and I was elated. After all the hugging and popcorn throwing she turns to me and says, “ Kinda be nice if I won the car. “
After the game , I arranged for over 30 family and friends to meet at a local restaurant for drinks, story telling, and to celebrate the engagement. 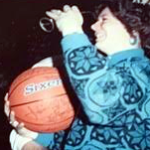 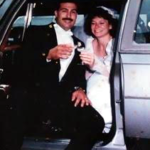 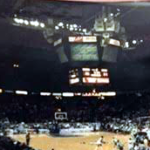 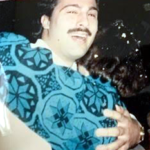 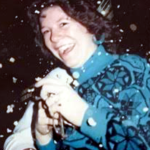