Like a true Millenial couple, Madison and Steve met on the dating app, Hinge. On January 27, 2018, Steve invited Madison for drinks and tacos at Merkle's in Wrigleyville followed by ice cream from Oberweis- anyone who knows Madison knows that this was the highlight of the first date! They proceeded to talk on the phone during the week while Madison was traveling for work and explore Chicago when she returned on the weekends- trying new restaurants, seeing shows, and meeting each other's friends. In their first year, they traveled to LA to celebrate their birthdays and visited their hometowns to meet each other's families. They took advantage of Madison's work trips to explore the beaches of Ft. Lauderdale and their love of country music at a festival in Dallas. Madison and Steve celebrated their first anniversary in Punta Cana and were supposed to celebrate their second in Italy (thanks COVID). As their relationship progressed, Madison and Steve knew they were ready to take the next step and move in together. They signed a lease in the Lakeview neighborhood of Chicago two days before the COVID lockdown began. Before they had their new apartment, they quarantined and worked from home together in Madison's small apartment, which only made their relationship stronger! As their lease came up for renewal, they realized that as much as they love Chicago, they both wanted to be closer to family back East and are now settling into their new home in Malvern. In July, Madison and Steve headed back to NJ to attend The Smith Family's Annual LBI trip. Leading up to the trip, Madison and Steve spent the week working from Madison's parents' house in River Edge. One morning, Steve and Mr. Smith decided to golf, which Madison later learned was code for getting her a ring in NYC! On the first day of the trip, August 1, 2020, Steve persuaded Madison to go on a walk on the beach before dinner. As they approached the ocean, Madison noticed "Marry Me?" spelled out on the sand in sea glass- the same sea glass Madison has been collecting since she was little. With cheers and support from the beach crowd, Steve gave a sweet speech (which Madison had him repeat after since she was so overwhelmed in the moment to remember!), got down on one knee and asked Madison to be his wife- of course she said yes! Surrounded by family and friends and a stealthy photographer, they celebrated and captured the moment and are now excited to plan their big day. 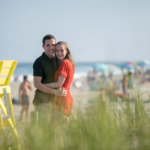 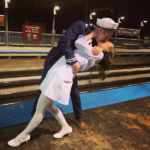 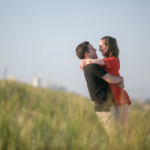