My wife Maureen and I met through mutual friends at a birthday outing. Everyone was at a local hotspot drinking and dancing the night away. I had come with a buddy with no expectations other than making some new friends. I saw Maureen and she caught my interest. We met again through the same friends and it didn't take much time before we connected.
To be honest I had no intentions of meeting anyone. Neither did Maureen. It just happened. Two people who just managed to cross paths at a time in life that was just right. That's us. It was too easy. We compliment each other well. We just knew we were meant to be. Our friends called us the Schmoopies. Yup, we made everyone sick with our love.
I bought a ring and called my friend Paul. He is a chef and I gave it to him to take to the restaurant ahead of my birthday dinner. I informed him of her favorite dessert, tiramisu.
It was my birthday, February 5th. Maureen and I went shopping. We walked by a Zales and I entertained the thought of going in to take a gander at engagement rings. She thought "Oh no, he's never going to ask!" Her words.
We went to the restaurant Limoncello. We had a fantastic meal and were awaiting dessert. Maureen was frustrated because she wanted to indulge yet we hadn't even ordered. She didn't know I already had, before Zales, before everything else that day. Paul had prepared a very special tiramasu for her.
The plate came to the table. It was the tiramasu with a diamond ring. My birthday wish, well, I guess you can piece that part together. Here we are almost 10 years of marriage.
On St Patrick's Day 2012, we married at St John Neumann Church and had our reception at The Desmond Hotel Malvern. It was a beautiful early spring day and our guests had the best time. We even celebrated our first anniversary there. Our marriage is still going strong and we are so grateful for the memories we hold of our wedding at The Desmond Hotel Malvern.
Engagement: 2/5 Wedding: 3/17/2012 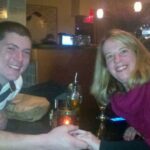 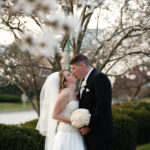 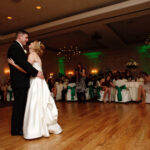 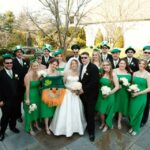 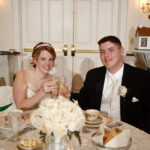